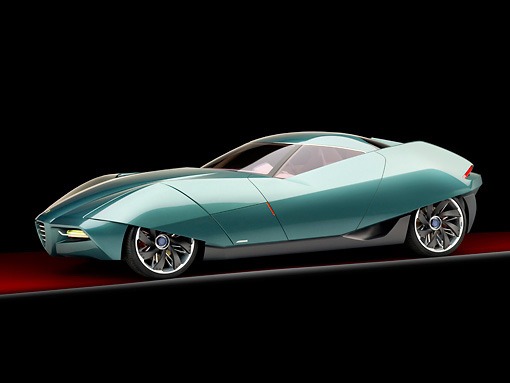 The B.A.T. 11 evokes Bertone’s glorious past. It was commissioned by Gary Kaberle, an American collector. As a teenager he had fallen in love with the B.A.T. 9, which had fallen on hard times and was parked in front of a Dodge dealership in his Michigan hometown to draw customers. The young man, saved up his money and bought the car, according to an article in Classic & Sports Car Magazine in 1994, but sold it years later to pay medical bills for his wife. The B.A.T. 9 joined its siblings when the cars were restored and brought together in 1989. In 2005, they were shown at the Concours d’Élégance at Pebble Beach by their new owner, Cars International Kensington Ltd., a British dealer of expensive road and racing cars. They were valued by the company at $8 million before being sold to a private collector. Dr. Haberle went to Bertone in 2008 with the idea of a new B.A.T. The B.A.T. 11 is built on the chassis of the Alfa Romeo 8C Competizione.