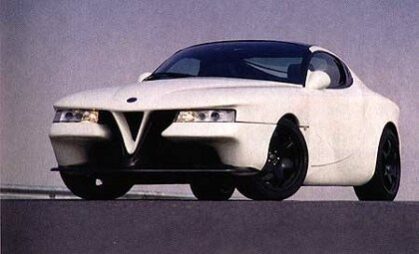 Castagna, historic coachbuilder from the 1920’s and 1930’s producing famous bodies for Alfa Romeo and Lancias amongst others, was revived in 1995 by Italian businessman Umberto Petra. The debute models was this Alfa SZ based prototype, designed by Gioacchino Acampora, named the “Vittoria” after Petra’s eldest daughter. Based on the SZ/RZ limited edition Alfa Romeo sportscar, which itself was based on an uprated Alfa Romeo 75 3.0 V6 floorpan and mechanicals. Castagna claim that their reworked 3.0 V6 engine produced 320 bhp @ 7,000 rpm ( against the standard car’s 180 bhp ) while still retaining the original single camshaft per head setup. The Alfa Romeo’s front wishbone and rear de Dion suspension was upgraded with stiffer springs and dampers, nylon and rose jointed bushes, and revised geometry. The brakes were upgrated with Brembo 6-pot calliper, cross-drilled and vented discs, while the prototype ran on 18in magnesium alloy wheels. The styling was controversial and very brave. The Castagna Vittoria made its debut at the 1995 Geneva Motor Show. Over the years it has been stored gathered dust losing an original mirror and got some small damages. It was still located somewhere around Milano. But in 2010 the Vittoria was completely restored: during this restoration some minor changes have been made in the interior and somehow the car lost its unique bonnet emblem with the text: “Sic itur per angusta ad augusta” being replace by a normal Alfa Romeo badge.