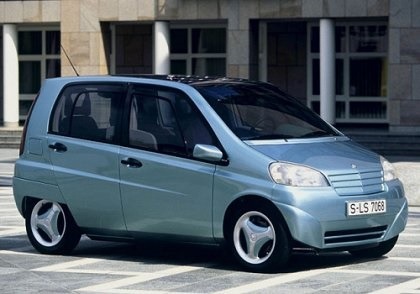 Advanced design for the Mercedes Classe A: Two running prototypes (Hybrid engine and petrol version) developed and built by I.DE.A Institute on Mercedes’ styling.
“Rethinking the car” was the motto adopted by Mercedes-Benz when it presented its Vision A 93 concept car at the Frankfurt Motor Show 1993. A compact, front-wheel drive vehicle, Vision A 93 was a completely new departure for the brand. And Mercedes made no bones about the fact that such a concept could well end up as part of its future model range. The reaction was instantaneous. Was this really supposed to be a Mercedes? It was left to the show-goers to decide. In the event their verdict was very favorable, with 80 percent approving of a small Mercedes along the lines of Vision A 93.

The concept car then drew more praise when it went on show with a few minor changes at the 1994 Geneva Motor Show, this time under the new name “Studie A”. For the American magazine “Motor Week” it was “Best Concept Car 1994”. By this time the matter had been settled and the Board of Management had given the go-ahead for production. The A-Class arrived on the market in 1998 and, despite initial problems, became a huge success story for the company. In 2004 a second generation, the W 169, took to the road.