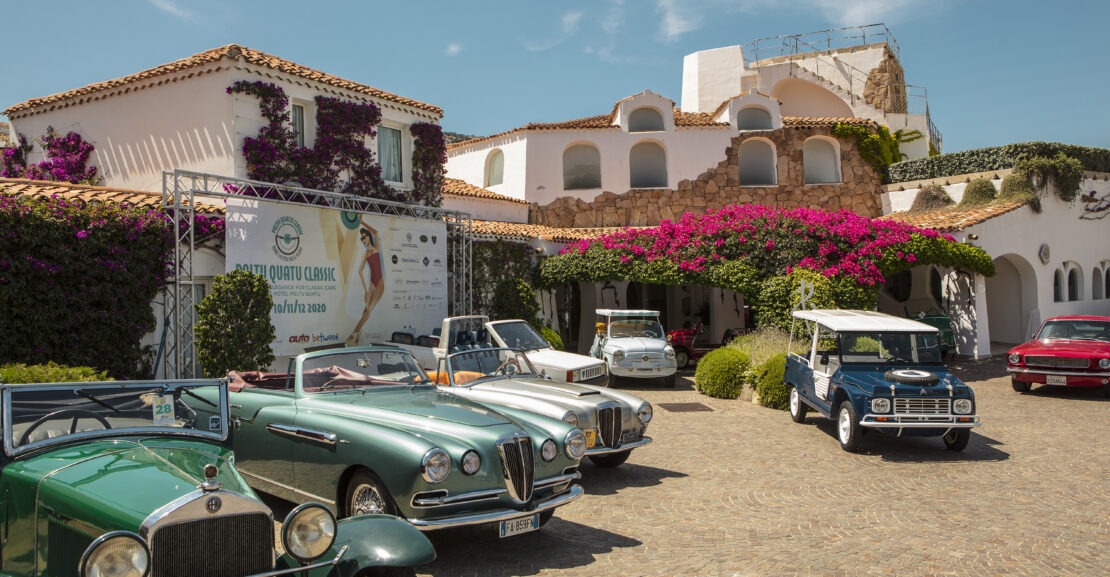 The Poltu Quatu Classic is back among major international events with the fifth edition of the most glamorous Concours d’Elegance of the summer organised by Auto Classic and Between Comunicazione in collaboration with the Grand Hotel Poltu Quatu and Bcool City Magazine. On 10, 11 and 12 July authentic four-wheeled gems from the most important Italian and European vintage car collections paraded through the streets of the Costa Smeralda.

WINNER OF THE CONCOURS was the 1970 Porsche 917 LH, dubbed “psychedelic” for its livery, the beauty queen of the Poltu Quatu Classic Concours d’Elegance. The car that starred in the 1970 Le Mans 24 Hours crewed by Gérard Larrousse and Willi Kauhsen, who finished second behind Hans Herrmann and Richard Attwood’s 917K, picked up Best of Show award at the classic summer event on the Costa Smeralda. A challenging head-tohead with the Ferrari 857 S, a racing car produced by Ferrari in three units in 1955, Scaglietti‘s masterpiece.

The Jury of the Concours was chaired for the third consecutive year by Paolo Tumminelli, the well-known automotive historian who over the past few years has created and finetuned an almost infallible evaluation system. With him the well-known designer Fabrizio Giugiaro who, in line with tradition, designed and made the “Best in Show” trophy, Emmanuel Bacquet representing FIVA, Luciano Bertolero founder of Auto Classic and a great Ferrari expert, Alberto Vassallo CEO of Car and Vintage and J. Philip Rathgen CEO of Classic Driver, among the most popular social media in the automotive world, Carlo Di Giusto deputy director of AUTOITALIANA and Ruoteclassiche, Alberto Scuro president of ASI, Enrico Renaldini PR of Gare d’Epoca, Augustin Sabatié-Garat of RM Sotheby’s, the world’s biggest collector car auction house with 40 years of proven track record in the industry, Valentino Balboni legendary Lamborghini test driver and testimonial of the futuristic myclassic vintage car app, and Ted Gushue, internationally renowned photographer and managing editor of the official new Porsche magazine Type 7.

The jury was dressed by Larusmiani, the iconic Milanese men’s clothing brand rich in a history that sees it as the oldest men’s brand and tailor in Via Monte Napoleone, founded in 1922. For the occasion Larusmiani dressed the jury in a new timeless classic, “Poltu Quatu” Bermuda shorts, in honour of the iconic port of the Costa Smeralda.

For Concours participants, an exclusive designer Poltu Quatu Classic version of the Tiro Victory Corporate T-Shirt was created in collaboration with the clothing line of the historic Italian company Beretta.

Many new initiatives were packed into this year’s programme: the stop off on Friday 10 July at San Pantaleo was the occasion for the world premiere live debut of the new electric barchetta Dora Bandini, prototype designed by Giorgetto Giugiaro for HYPER 3, a startup that will operate in the luxury market to promote the rebirth and enhancement of historic Italian brands. HYPER 3 is in fact investing in an ambitious programme of historic brand revivals aimed at the collectors market that was announced on Friday evening in the magnificent village of San Pantaleo.

Giorgetto and Fabrizio Giugiaro’s GFG Style brought to Sardinia the two prototypes that were to have been presented at the cancelled Geneva Motor Show: we are talking about the futuristic GFG VISION 2030 and the Bandini Dora the 100% electric barchetta that will be used to relaunch the famous Italian brand founded in 1946 by Ilario Bandini.

The whole of Saturday was dedicated to a long panoramic tour of the Costa Smeralda along a route specially designed by the organisers to give participants unforgettable scenery to admire from behind the wheels of their cars. The rest of the day was spent chilling out on the celebrated Vesper beach of Capriccioli made famous by the movie “The spy who loved me” where Roger Moore, 007, emerges in his car from the crystal clear waters of the Costa Smeralda in the company of Barbara Bach. On the way back to Poltu Quatu the cars from the Concours could not fail to visit and show themselves off at Porto Cervo at aperitif time.

On Saturday 11 July the final drive-past of cars took place in front of the Jury after the Gala Dinner at the Grand Hotel Poltu Quatu in the famous piazzetta that was illuminated for the occasion.

“Our guests had a fairytale weekend at Poltu Quatu as in past years and in complete safety,” assures Antonio Pulcini, President of the Group that owns the Grand Hotel, a particularly important result this year after Covid-19 and witness to the return to an absolutely special normality. It is no coincidence that the slogan of the event reads “make life dolce again”.

The participants enjoyed another wonderful experience between visits to historic townships in Sardinia and days on the beach, driving their vintage cars against the breathtaking backdrops of the Costa Smeralda. As in the last edition, the event ended on Sunday 12 July afternoon at the exclusive Li Neuli Country Club.

SIX CLASSES There were six classes, each of them the custodian of veritable four-wheeled treasures: the Racing Legend class dedicated to cars symbolising the history of rallying saw the triumph of Edoardo Schon’s Lancia Delta Martini Safari, a car used in the African rally by two-time world champion Miki Biasion. It then passed into the hands of a Greek driver before arriving in Italy as part of Giorgio Schon’s collection. And competing with it for the class prize, extraordinary models like the other Delta Martini of Miki Biasion, and a 2001 Ford Focus Wrc of Colin McRae, a car that made its debut in the Monte Carlo Rally, the extreme evolution of the use of electronics in rally cars, brought to the Costa Smeralda by its current owner, the Consul of Antigua and former sailing Olympian Carlo Falcone.

MILLE MIGLIA CARS The 1947 Alfa Romeo 6C 2500 Cabriolet Pininfarina that competed in the 1949 Mille Miglia, the height of elegance in its styling and interior with mother-of-pearl steering wheel and knobs, was brought to the Concours by Mattia Colpani, winning the MILLE MIGLIA® BOND. In this class the Spirit of 1000 Miglia was also awarded to the car that best represented the essence of the Freccia Rossa – in this case Enrico Bertone’s Lancia Lambda Casaro which participated in the first edition of the Mille Miglia in 1927, and in the 90th anniversary edition in 2017 with Simone Bertolero – while Enzo Moroni’s 1954 blue France Osca Mt4 Morelli won the Jury Prize.

THE DOLCE VITA ON THE COSTA SMERALDA The 1953 Lancia Aurelia B52 Roadster Vignale was considered the most glamorous car at the event winning the class and was rewarded by Ted Gushue, Global Ambassador of St. Moritz, with an extraordinary weekend at the legendary Suvretta House. All Best in Class winners received a copy of Car Guys, a beautiful photo book written by Fabrizio D’Aloisio about people who love cars for people who love cars!

St. Moritz’s lifestyle is an intriguing mix of glamour, savoir vivre, prestigious events and a welcoming, feel-good atmosphere, the same that you breathe on the Costa Smeralda and this is also one of the reasons that led to its twinning with the Poltu Quatu Classic Concours d’Elegance.

Directly from the Roman dolce vita, a Fiat 600 Jolly Multipla with Ghia bodywork of which only 30 units were produced in 1961 for its launch on the occasion of the anniversary of the Union of Italy, won the Fiat Register prize. And then there were the WONDERFUL COUPÉS for connoisseurs, won by a Ferrari 365 BB Pininfarina, while the Asi prize went to Mauro Milano’s Lancia Flaminia Sport Zagato, and the more modern category of the FOREVER YOUNG to the Carrera GT of Raul Marchisio, a practically unanimous vote by the judges.

The organisers of the most glamorous Concours of the summer know well that “life is too short to drink bad wine” and they delighted the guests with the Ville d’Arfanta prosecco, a wine that is pure poetry. From Piedmont, where the Poltu Quatu Classic Concours d’Elegance also has its roots, came the spectacular Rosso Barchetta di Colle Manora, a wine dedicated to those who love the myths of the past, clean style and technology, born out of the union of two great passions of the Schon family: wine and Ferrari!

Micol Sabbadini of the historic Sabbadini high jewellery Maison gave the prize to Laura Marchisio as the most elegant woman in the Concour with one of its celebrated Bee jewels.

Among the partners of the fifth edition of the Costa Smeralda Concours d’Elegance mention must be made of the prestige of Rotschild & Co, one of the largest independent financial consultants in the world, and Smeraldina, the most popular bottled water in Sardinia and adored by international tourists, especially Americans!

The winner of the “Best in Show” Trophy, designed by Fabrizio Giugiaro, and the winner of the Special Jury Prize were presented with a precious Eberhard watch. Finally, Goodwool will create a spectacular canvas in the image and likeness of Gérard Larrousse’s Porsche 917 LH.

As is traditional, Simone Bertolero presented the event on board the legendary Fiat 500 Spiaggina, the favourite summer car of the big players in the international Jet Set among whom we would like to remember Avvocato Agnelli and Aristotele Onassis. The journalist Savina Confaloni, one of the most popular and best known faces in the motoring world, was at his side in this edition of the Concours, as always.

The last edition of the Poltu Quatu Classic Concours d’Elegance saw the success of Ferrari after the victories in the previous editions signed Alfa Romeo and Bugatti; 2020 saw the victory of Porsche as the most elegant car of the summer!

Simone Bertolero announced: We are already working on the 2021 edition with an ambitious project that will involve the entire Costa Smeralda on the American model of the Monterey Car Week. The Poltu Quatu Classic will become the final act of a series of events dedicated to motoring in the wonderful setting of the most glamorous part of Sardinia, as the Pebble Beach Concours is in America, and will take place in the first week of June after the Villa d’Este Concours d’Elegance. Our Classic Week will be a pure concentration of beauty and we all believe that “beauty will save the world”.