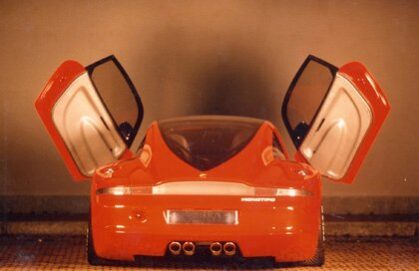 Launched at the 1998 Turin Motorshow, the Stola Abarth Monotipo does not in the slightest bit look like the Fiat Barchetta, which was used as a base for the project. Penned by ex-Pininfarina designer Aldo Brovarone, the Monotipo was conceived to showcase Stola’s craftmanship rather than to be a fashion statement. The Abarth Monotipo used Lancia’s 260 bhp 2.0 16v turbocharged engine along with a limited slip-diff and huge Ferrari-sourced Brembo ventilated disc brakes. The body was made almost entirely of composite materials, all based once again around the Fiat Barchetta.
The Abarth Monotipo draws on race car themes throughout the design, including built-in air jacks, intergrated towing eyes, Momo seats, steering wheel and gearknob as well as running on 18-in O.Z. wheels fitted with Goodyear Eagle F1 tyres.
Like the 1996 Dedica, the Abarth Monotipo was designed by retired Pininfarina designer Aldo Brovarone, a close friend of Stola managing-director Alfredo Stola.
The doors swing upwards at the touch of a hidden switch, while the roof comprises of a long, sweeping aerospace-developed Plexiglass roof panel. Fiat’s close relationship with Stola allowed them to licence the “Abarth” tag, and traditional Abarth scorpion badges are located at the front and rear.