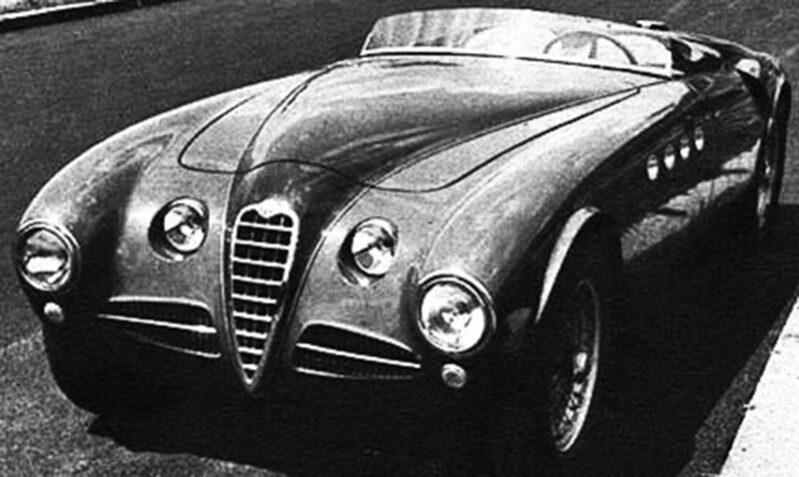 The Alfa Romeo 412 Spider Vignale was a racing car built in 1939 with a Touring body then changed in 1951 by Vignale who used a more modern and aerodynamic livery in line with Alfa Romeo style of that period. It took part in different races with the original body but also with the one made by Vignale.

One-off belonged to Felice Bonetto until 1953, it was sligthly modificated during the years for road use. 412 passed away in the early 1960s.

“I remember a itemized list of experimental racing cars existing at the Experience Service right after the war. It was the end of 1945.” In this way the memory about this car made by Elvira Ruocco, manager of the Alfa Romeo Historical Archive from 1983 to 2005, begins.
She continues: “From this itemized list it appeared there were two 412 completed, (of 4 made), and one of them was located at the headquarter of Portello and anothe one was in another warehouse. Although I remember very well at the Triuggio decentralization a chassis complete with engine was in storage, another engine was storaged together with the 412 hospitalized in the Melzo decentralization.“

After the Second World War one of the four examples produced (according to the book wrote by Fusi) was sold to the Swiss Willy Daetwyler, who led it to victory in different mountain competitions and in 1948 won the G.P. of the Bremgarten.

The framework shared with the 8C 2900-A was identified with the number 412151. Probably this number was used to named the car. It was equipped with a 12-cylinder V engine of 4495 cm3, built in two monoblocks of 6 cylinders, which developed up to 430 hp and was turbocharged. It was designed by Vittorio Jano in 1937.

and the engine was increased at 4,5 liters, but on a new and lower framework. On account of the subsequent limitation of the engine size for Gran Prix cars (3 liters), the 12 cylinders of 4500 cc became useless, and were used since 1939 for sports-type races, and for touring cars.
With the Touring car body, the 412151 took part in different races, including the Mille Miglia of 1950 (Bonetto – Casnaghi) and the Targa Florio of 1950.

In 1951, the Alfa Romeo 412 of Felice Bonetto took part in the Giro di Sicilia, from 31 March to the first of April, but it off the road wrecking its car body. So, the car body designer Vignale prepared a very light Spider as a second dressing, deeply modifying the previous one.
With this new car, at the end of April 1951, Bonetto (with Casnaghi as navigator) took part in the Mille Miglia ranking sixth with the number 427.

So, the intervention of Vignale can be dated to April 1951. This photography taken during the above mentioned Mille Miglia in which it’s completely stripped (maybe to reduce its weight for the race) and with the number 427 painted by hand. The car then participated in a race in Oporto in 1951, and won by beating the Ferrari 166s and the Maseratis. 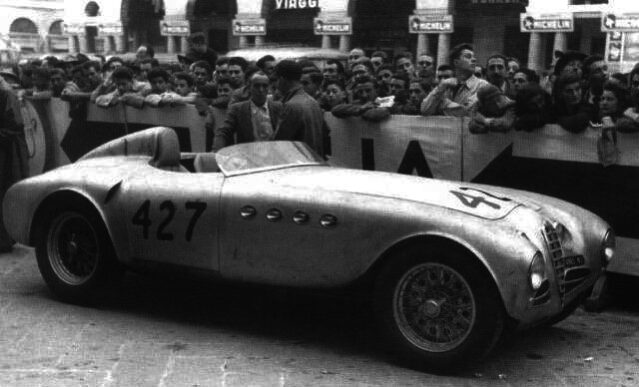 Successive changes and use on the road

After the Mille Miglia of 1951 the car was modified. In Oporto we can see it painted, but other subsequent photos show the car with further modifications until its final look.

On Road & Track magazine of October 1951 (a US periodical dedicated to vehicles) we can find an article called “A special 230 hp Alfa”, written by Corrado Millanta in which we can see other images of this car. In these photos we can see the aerodynamic appendix placed behind the rider’s head has been removed (present during the Mille Miglia of the same year). It was designed to eliminate the aerodynamic turbulence caused by the head of the rider on account of the windscreen placed very low; moreover we can notice thin moldings surrounding the ‘volume’ in relief that comes from the shield, which runs through the hood reaching the ends of the windshield and up to the end of the car.
The painting has a slight chromatic variation: 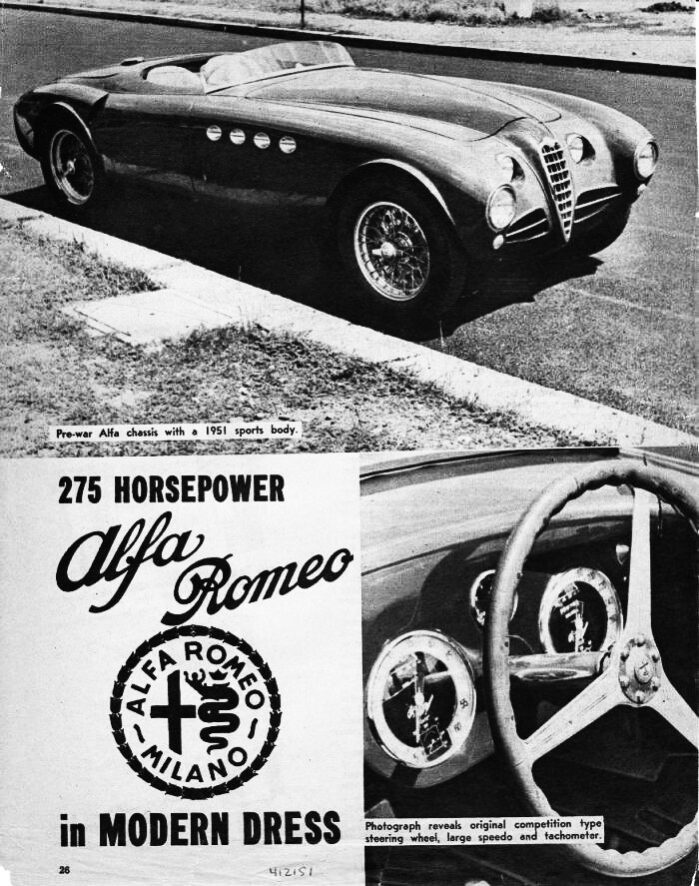 The 412 Vignale is like a pure Spider, without a folding roof, two-seater, characterized by a very long hood, 4 side chromed air intakes for each side placed between the front fender and the passenger cockpit. The front has 4 headlights, two at the ends and two central plus turn signals. Moreover it has the trilobo, appeared in a completed shape for the first time the previous year (1950) on the 1900 sedan.

Unlike the 1900s, the shield has a very subtle vertical shape, recalling the design of the one of 6C 2500 Villa d’Este and other 6C 2500 Touring, from 1946 onwards. As mentioned before, the shield is placed on a raised volume which continues along the entire bonnet up to the windshield, creating its basis in a very clear and marked way, as for the Villa d’Este, but here is smoother and without details/chrome, probably on account of the ‘essential’ character of this racing car. This is a beautiful Alfa Romeo which expresses a strong balance between a great elegance and a sporting spirit. Its line is absolutely particular because it blends features of the Villa D’Este with others of the 1900 in a really unique way that we can’t see in other subsequent Alfa Romeo. Moreover the 12-cylinder engine equipped on this car increases enormously its appeal. Starting from the end of 1951 this car was also used for road use (or maybe only for road use only, because it no longer took part in competitions and it was registered), as mentioned in another article appeared on Road & Track Magazine in September 1952, written by Burton Harrison. The journalist is accompanied on a breathtaking journey on the 412 driven by Bonetto, probably around the San Siro stadium in Milan. During the path of the car, an increasingly large crowd is witnessing the driver’s evolution with growing enthusiasm. The 412 was parked at the Scuderia Volpini and its engine had just remade by Alfa Romeo, which had recommended not to exceed 5000 rpm. Although Bonetto was ‘in love’ with this car, it had already been put for sale, as confirmed also by an advertisement appeared on Road & Track Magazine in January 1953.

The death of Bonetto and the succession of sales

Felice Bonetto died on November 21, 1953 due to a racing accident, in Mexico, during the IV Carrera Panamericana. The 412 was sold to Cortese, who on 4/12/1954 offered it for 20 million lire to Henry Wessells, an American, well-known automobile collector, in particular of Alfa Romeo. In another letter of 12/1/1955 Cortese replied to Wessells this selling was no longer available because the car had been sold in Spain, but this step is not documented enough, and probably the car was sold to the Italian branch of a Spanish dealer.

The car was ‘saw again’ by Marc Wallach in Milan in 1958, who in 1999 wrote a letter to the editor of ‘Forza’ telling this episode, when he visited the last workshop of Enrico Nardi, driver, engineer and car designer, in via Vincenzo Lancia in Turin. In that workshop he noticed 2 touring cars with 6C 2500 engines and “a wonderful Alfa Romeo V12 GP 12C,

with a 2-seat car body from Vignale ”. There’s a photo taken in the workshop where we can see Wallach near the 412, identifiable by the rear air intake, placed between the cockpit and the rear fender.

Probably Enrico Nardi kept the car as it is until 1960, a year that maybe marked the end of the 412. There are few sources about the last chapter of the history of this car and all referable to the history of Nardi and his activity, so they come from a single source and they aren’t verifiable, although no other source contradicts what is told in all publications about Nardi’s activity.

In 1960 the car was dismantled: framework, engine and car body were separated and had different fates. Framework was used to make a new car, which was sold under Plymouth brand in the United States with the name of Silver Ray. This car, designed by Michelotti, future BMW designer, wanted to be the prototype of a subsequent series production but remained a rare example.

It had a Plymouth engine, an eight-cylinder 320 hp. The news is also supported by a 1992 calendar by Nardi which shows it, specifying it was made on an Alfa Romeo 4500 framework.

The engine of the 412 remained for years in Nardi’s workshop until its daughter sold it at auction at the end of 1998. It was bought by Larry Auriana, an American collector, who had it restored by Epifani Restorations, in Berkeley (USA). Probably he still owns it. The comment accompanying the engine at the auction is quite inaccurate but provides interesting news about the car.

There are no sources or news about the destiny of the car body of the 412 Vignale. The end of this beautiful, unique and engaging ‘dress’ is a mystery, although probably it didn’t survive, since there are no news about it.

There’s at least one test of replication of the 412 Vignale, in red color.
This is only an imitation with many inaccuracies compared to a photo of the original. 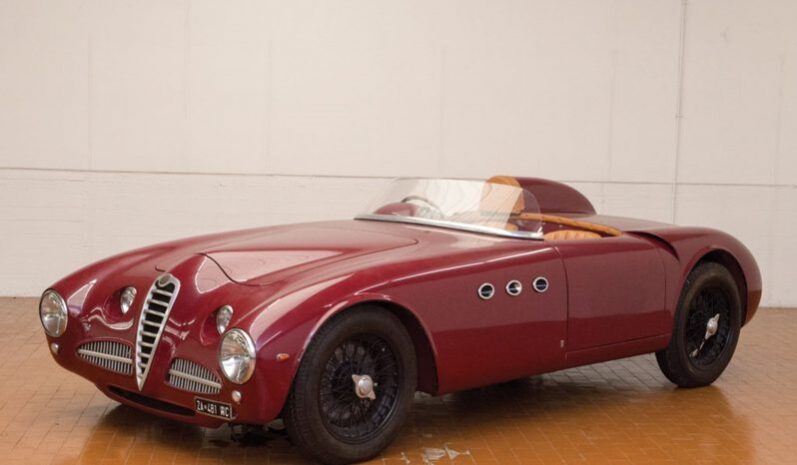 There are many scale models of this car which represent it both in the Mille Miglia race configuration and painted in different colors. Searching on internet we can find many photos of them, as further proof of the fact that 412 Vignale fascinated thousands of car enthusiasts, alfisti and not, from its birth to the present day.

Many years have passed since the last time in which the powerful and metallic sound of the 12-cylinder Alfa Romeo engine resounded on the streets of Milan and Italy, combined to the unique livery created by Vignale. Since then the Alfa has built the history of motoring in Italy and all over the World, marking it with its unique and admired brand, even if sometimes it experienced crises and dark times. The history of this car inserts itself into all stories of cars and men who making great this brand thanks to their passion, their tenacity and their Sports Heart. 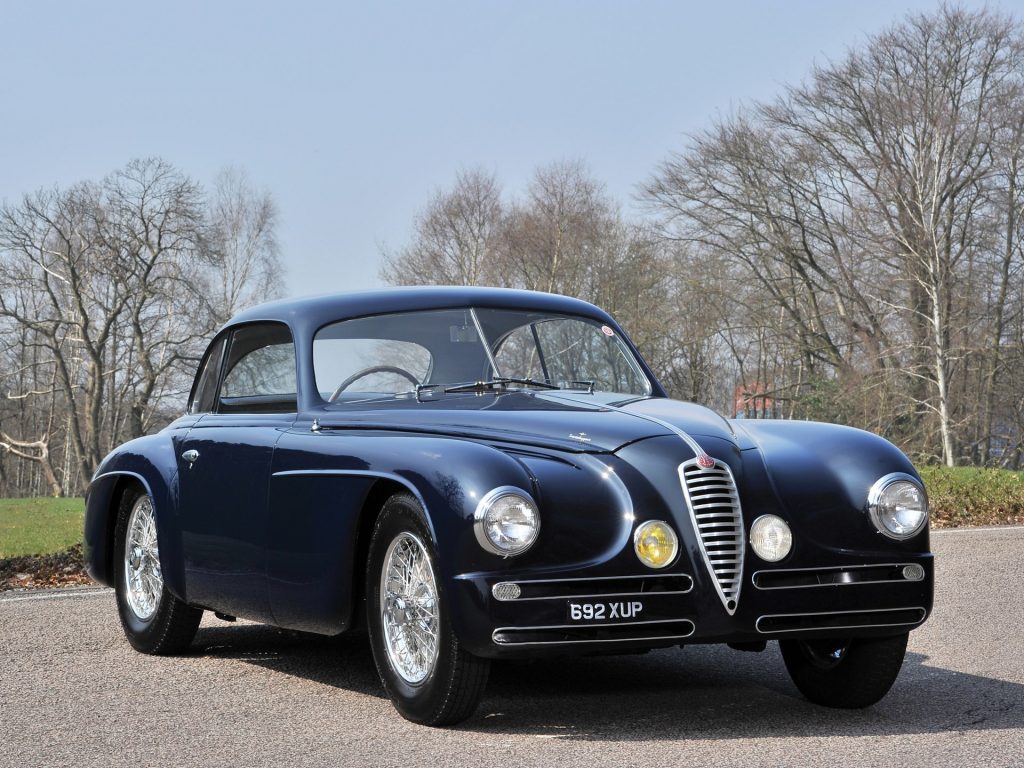 This beautiful car, designed by Carlo Felice Bianchi Anderloni, takes its name from the Villa d’Este elegance concours held in the Cernobbio hotel since 1929 and which, in the 1949 edition, saw this car win the “Gran  Premio Referendum” prize awarded by the public. The “Villa d’Este” was one of the last Alfa Romeo models…

One of the first Italian sports cars to feature an American V8 was the little-known Nardi Silver Ray they built in 1960. Giovani Michelotti designed it and then Nardi built it on a tubular frame with some suspension parts from Alfa Romeo. However, the most interesting thing was the engine. The Nardi Silver Ray used…