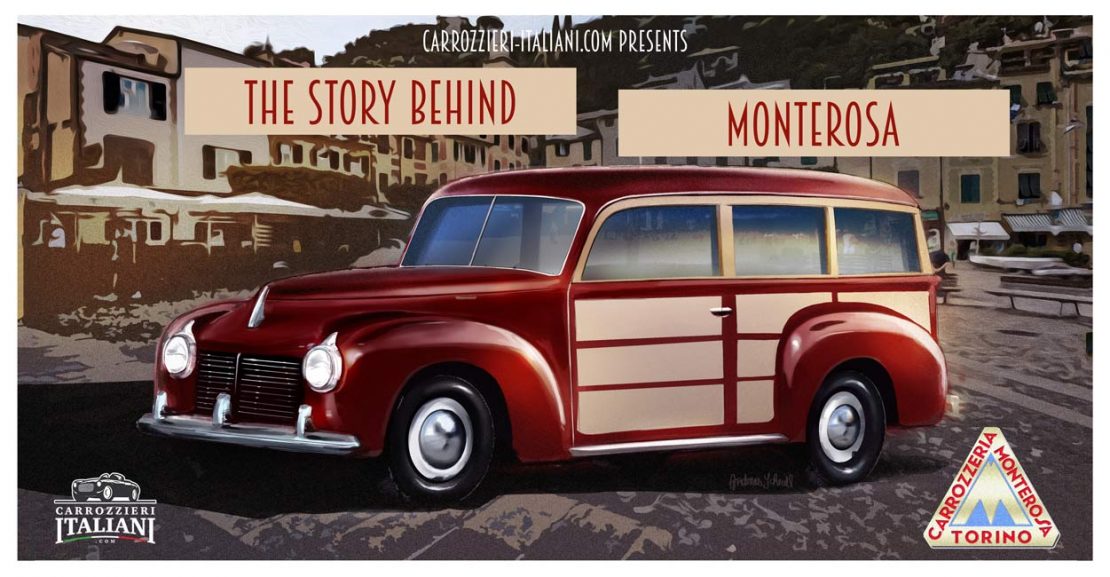 In 1946 Giorgio Sargiotto founded the Monterosa Bodyshop, together with Edgardo Barbero who assumed the role of CEO.

From the inspection of the Turin Chamber of Commerce, it appears that the limited liability company Carrozzeria Monterosa was established on 11 January 1946 with headquarters in Turin in Sant’Agostino street, at number 12 and was registered on 22 February 1946 at number 188467 of the book of companies that indicate the social purpose of repairing and building motor vehicle bodies. The capital of 400,000 lire had been paid in equal shares by Edgardo Barbero, who had assumed the office of President, Tommaso Sargiotto, who had assumed the office of administrator and Sergio Sargiotto , also an administrator. 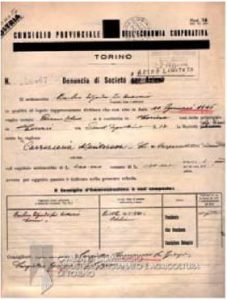 The original document of the Turin Chamber of Commerce.

Only Giorgio Sargiotto had competence in the matter of coachbuilding. Born on March 6, 1915 in Turin, he gained his experience at Bertone. On 27 July 1942, when he was already the Head of the Ferradori Department, he had been promoted to the First Technical Category with the role of Deputy Chief Officer. On 19 November 1943 he reached the top of his career, assuming the role of Chief Officer. Tommaso Sargiotto, Giorgio’s cousin, had trained at the Anelli & Bosio company and had become a good mechanic. President Edgardo Barbero, born in Biella on August 4, 1900, was far away from automobile construction, but he had a business sense.

From a research in the State Archive it appears that Barbero was a merchant, then an officer of the Sharpshooters, then a business traveler and finally, from 1939, an employee of the “Radio Brevetti Ducati“ Scientific Society. In 1930 he had been declared bankrupt with a sentence of August 27, pronounced by the Court of Biella, which however, due to an amnesty, had not proceeded by bankruptcy. Barbero was known to the Police, who in a report wrote: “On February 3, 1931 his card (of the National Fascist Party. Ed.) was suspended For reasons that could not be specified but which is believed to be due to the standard of living that it led. In fact, in the last years of his stay in Biella he lived by expedients bordering several times on the penal code, he also lived with a prostitute of the worst kind. (omissis…) He was one of the first squadrist of Biella, always first in risky actions, never backs away from danger and with his example drags the comrades (omissis …). After the war Barbero had changed his life and had put his irrepressible vitality at the service of the Carrozzeria Monterosa.

The company had specialized in stationwagons construction, obtaining immediate success because during the reconstruction period the demand for work vehicles was strong and the Monterosa stationwagons were well made and lent themselves to pass elegantly from commercial activity to leisure on holidays. 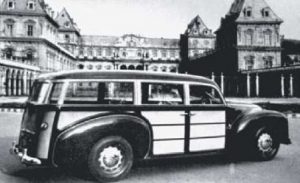 Initially Monterosa mainly deals with the construction of Giardinetta’s (stationwagons) on Fiat 1100 and Lancia Aprilia, a kind of product that is in great demand in the immediate post-war period; production occasionally also spans from ambulances to hearses and advertising vehicles, subsequently extending to the new Fiat 1400 and Lancia Aurelia.
In painting and surface treatment the stationwagons imitated the wooden material, but contrary to Viotti‘s way of building the Giardinetta’s (which made use of real wood due to steel shortage during the post-war period. Read the article about it), Monterosa used metal with all the advantages that this entailed. The rapid growth of consensus suggested moving to a larger site in Moncalieri. 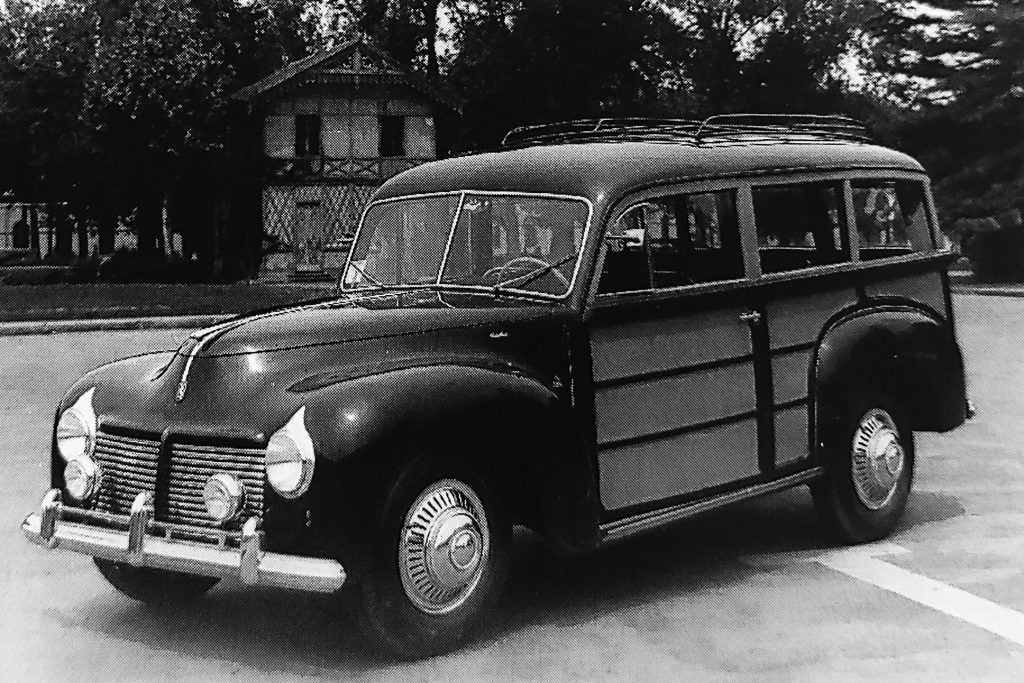 Chassis based on the Fiat 1100 and 1400 were the favorite ones, but there were also examples of station wagons on Lancia and Alfa Romeo. In 1954 Monterosa introduced a Fiat 1100/103 Coupè designed by Giovanni Michelotti, which achieved some success. The success increase in 1955 when the enthusiasm of the Italians for the Fiat 600 allowed Monterosa to put into production three different versions based on its standard chassis. At the base version there was always a two-tone paint with chrome decorations. At the first level of processing, a contrasting hue concerns only the pavilion and some decorative elements included a fake grille, special wheel cups, chrome seals on the drip panes, rostrl in the bumper, locks on the bonnet and profiles on the sides. The second level included in addition, the descending windows, custom-made seat covering, two-tone paint also inside the cabin, and a port objects under the dashboard. The last and more complete elaboration also offered fins on the rear fenders, a different arrangement of the turn signals and a greater number of friezes.

The first optional level had a cost of 60,000 lire, for each next higher level step, the price was always the same. This doesn’t look like big numbers, but they brought a economic prosperity that in 1956 allowed Monterosa to put into production a berlinetta and a coupè based on the Fiat 600 designed by Giovanni Michelotti. The style in the lower part was identical, but in the berlinetta, the pavilion changed with an additional rear windows.

At first, the rear window was panoramic in both, then for the berlinetta the coachbuilder preferred a conventional rear window to optimize costs and production.
In 1958, still based on a Michelotti design, Monterosa renewed its 600 custom-built

model and brought together a more spacious and luminous 2+2 Coupé.
Monterosa also renewed the 1100 based models by offering also here a 2+2 Coupè and a Giardiniera, both also available with a Fiat 1200 engine. At the beginning of 1959, due to Lancia‘s insistence, Monterosa proposed a stylistic elaboration of the Appia II Series. Lancia paid particular attention to Monterosa’s stylistic choices: in fact, during the set up of its successor model, The Appia III Series, many design elements were inspired by Monterosa’s proposal.
In autumn of the same year, Carrozzeria Monterosa put into production a coupè on Fiat 1500 S basis powered by O.S.C.A., designed once again by Michelotti, and presented also a very unique and special model: the 1800/2100 cabriolet, which however remained only a one-off. 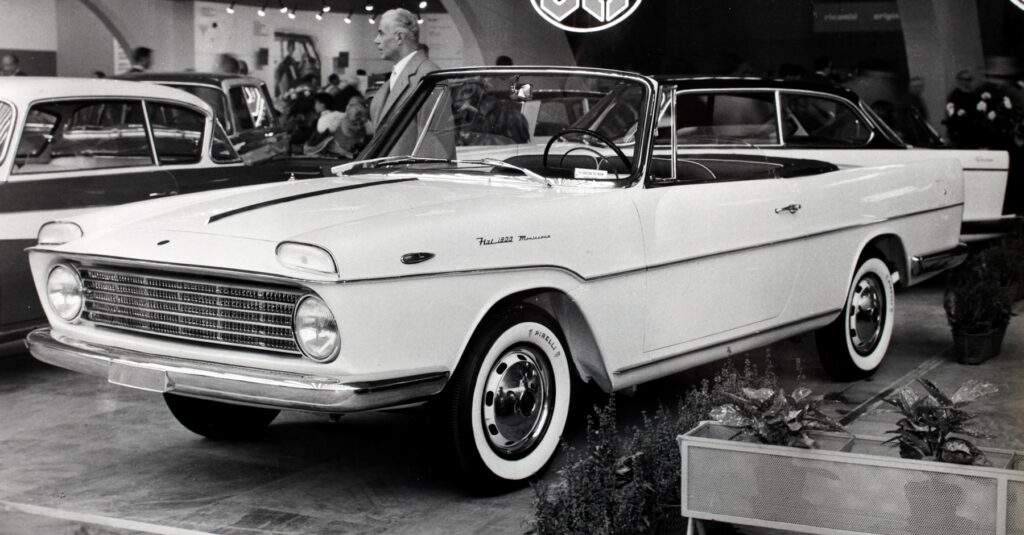 In 1960 Monterosa upgraded the 1500 S with minor adjustments, such as bumpers without bolts, and created its own Maserati 5000 GT‘s in a one-off version.
The profitable activity of custom made bodies for ordinary cars, especially of Fiat 600, is not enough to compensate for the crisis in the coachbuilder sector and in 1961 Carrozzeria Monterosa is forced to cease its activities.
Formally, the company exists until 1974, changing its corporate purpose into real estate management of the plant, given it to use to other companies. Sargiotto, on the other hand, goes to work in Japan for a couple of years and then tries, with little luck, to start over in Italy with a new bodyshop that bears his name: Carrozzeria Sargiotto, but that’s another story…

See the Monterosa dedicated page with all its models here.