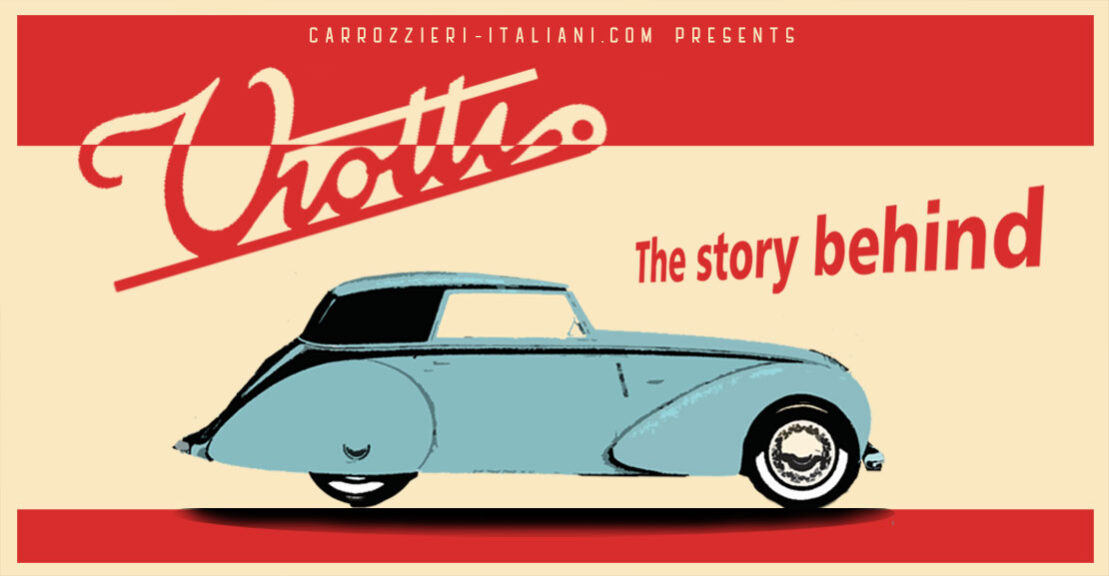 The history of Carrozzeria Viotti centers on its founder, Vittorino Viotti.
He was born in 1901 and started to work at Casaro. Shortly after with his colleague and friend Torquato Tolfo, he founded their own body shop in 1921.

Viotti & Tolfo opened in Via Ilarione Petitti 9, not far from the first Fiat factory in Corso Dante.

With about a dozen specialized mechanics, they built luxury chassis based on the traditions of the time that is. This includes fulfilling the desires of individual customers.
Initially, it mainly deals with repairs, but around 1924-25 they are commissioned to set up the first complete bodyworks. Quickly their “linea gran Moda” (a torpedo aerodynamic body) has an absolute success and brings orders even for luxury cars. They mainly work on a Fiat and Lancia chassis, but also set up some Ansaldo and aluminium Itala 61 for the Duke of Spoleto (1927).

In 1927 they acquired the Clairalpax patent from the French body shop Paul Audineau for a new lightweight construction method in alpax that allows the creation of thin roof pillars and large glass surfaces.

Thanks to a savvy combination of technical and sales abilities, Viotti & Tolfo quickly became one of the best-known brands.

They won numerous awards at elegance competitions with its fittings on Fiat 520 and 525 and the Alfa Romeo 6C 1750.

the birth of Carrozzeria Viotti

However, to expand their activity further, they needed to change their approach radically.
So in 1930, the company expanded its operation and organized it more industrially, under the new name of Carrozzeria Viotti.
This was a necessary step to grow from high-quality craftsmanship to the excellent industrial-quality that would characterize future cars.
The operation was possible with the support of the industrialist Ezio Magnanelli – who makes his Mechanical Plant available as a new headquarters. It also includes the support of two suppliers, Carlo Castiglioni – who closes his bodywork to enter the new company – and Arturo Maggiora – who instead keeps his “Martelleria” and the role of production manager at Viotti in parallel.

The first illustrious example is the splendid Fiat 525 SS sports car, which Fiat asked Viotti to produce the chassis in 1930. The following year saw the birth of the first car with relatively contained costs to be purchased by the middle class. It was ideal for Viotti’s standardized creation: the Fiat 508 ‘Balilla’, an attractive, modern and aerodynamic version.

The Fiat 508 ‘Balilla’ was so successful that Fiat, which was late in renewing its own model, decided to insert it in line for a brief period along with its standard version.

Viotti’s collaboration with Italy’s largest carmaker continued throughout the 1930s with the production of the standard versions of the 508 C/1100 with an open chassis, the elegant Cabriolet, and the sporty Spider. But the real industrial growth came shortly after the 508 “Balilla” in 1932. Viotti takes advantage of it to realize its versions, among which the aerodynamic sedan is particularly successful. As a result, Fiat temporarily puts it on the selling list waiting for his second series to be ready and has it delivered to the Polski-Fiat in Warsaw for series production. By specific request, Viotti continued to create unique models, expensive cars for private customers, as well as unique chassis for various uses.

These include the first service vehicles for EIAR, racing cars made by Siata, which were also used by Vittorio Mussolini, one of the sons of the Duce, and the record-breaking Maserati 4CM used by Giuseppe Furmanik in 1937 when he broke the record for vehicles with a 1500 cc engine.

This variety of vehicles shows how very specialized and professional Viotti’s body shop had become. With the outbreak of the Second World War, Carrozzeria Viotti was assigned the production of military versions of Lancia Aprilia and Artena, but the factory was destroyed by bombing as early as 1941. In 1946 Vittorino Viotti, in his role as President of the Carrozzieri Group of the ANFIA, tries to organize a consortium of companies for the production of a new type of car that it has developed in collaboration with Revelli: the Giardinetta.

Its wooden chassis was quite economical, the material was easy to find and could also be mounted on the old Fiat 1100s and Lancia Aprilias still on the road. It was a huge success, and the Giardinetta formula was soon imitated by many competitors and became a trend in a few short years. This was easy because of its wooden body, which overcomes the problem of shortage of steel in the immediate post-war period. It responds to the need for functional and low-cost vehicles to get Italian reconstruction moving. However, he cannot convince any of his colleagues, who are skeptical of the concept of a too-American car, and therefore, he starts production on his own.  In the late 1940s, he also resumed the production of custom-built luxury cars, especially on the Fiat 1100 and 1500. But it is the Giardinetta who mainly occupy Viotti, which also develops them on other bases and up to the luxury products of 1951-52 on Fiat 1900.
Lancia Aurelia and Alfa Romeo 6C 2500 designed by Michelotti, where the aesthetic aspect has now completely taken over with respect to functionality, transforming a vehicle born as a utilitarian into a fashion phenomenon.

In 1951, Viotti won a contract for the first 100 pieces of the famous Lancia Aurelia B20 Gran Turismo and would also later produce the coupé version of the Appia for Pininfarina.
Naturally, when Lancia decided to produce a family version of this model, it turned once again to Viotti, since the Giardinetta had become a synonym of elegance and practicality.

But Viotti could not handle the mass production, for the Aurelia B20, which was then moved by Pininfarina because Viotti risked not being able to satisfy the unexpected quantity of orders.
In 1956, the Gran Luce based on the Fiat 600, was introduced. A pleasant and attractive sports car destined for the general public soon joined by the Granturismo Berlinetta based on the Fiat 1100/1200.

But Vittorino Viotti died on Christmas Evening in 1956, and the company passes in the hands of his cousin Francesco Viotti, his collaborator.
In 1959 an order arrived from Lancia to build the Appia Giardinetta and, through Pininfarina, the Appia Coupé.

Production with the Viotti brand was extended with touring coaches based on Fiat 1800/2100 designed by Frua and with the Fiat 1500 Coupé Sport.
To try to regain visibility, in 1961 Viotti created three concept cars based on a design by Rodolfo Bonetto – Fiat 500, 600 and 1500. At the same time, it also launches the 1300/1500 Giardinetta, which however does not stand up to the competition of the standard Fiat version. And so begins a period of crisis that leads, finally, to closure in 1964.

In 2011 a group of entrepreneurs relaunched the famous Viotti brand, intending to offer expensive custom-built cars with the same philosophy of the golden age of coachbuilders.
The initiative, which is linked to Maggiora and is responsible for design Emanuele Bomboi, presents its first car at the 2014 Bologna Motor Show: the Willys AW380 Berlineta, a supercar with a Porsche engine, created in collaboration with Fast Design.