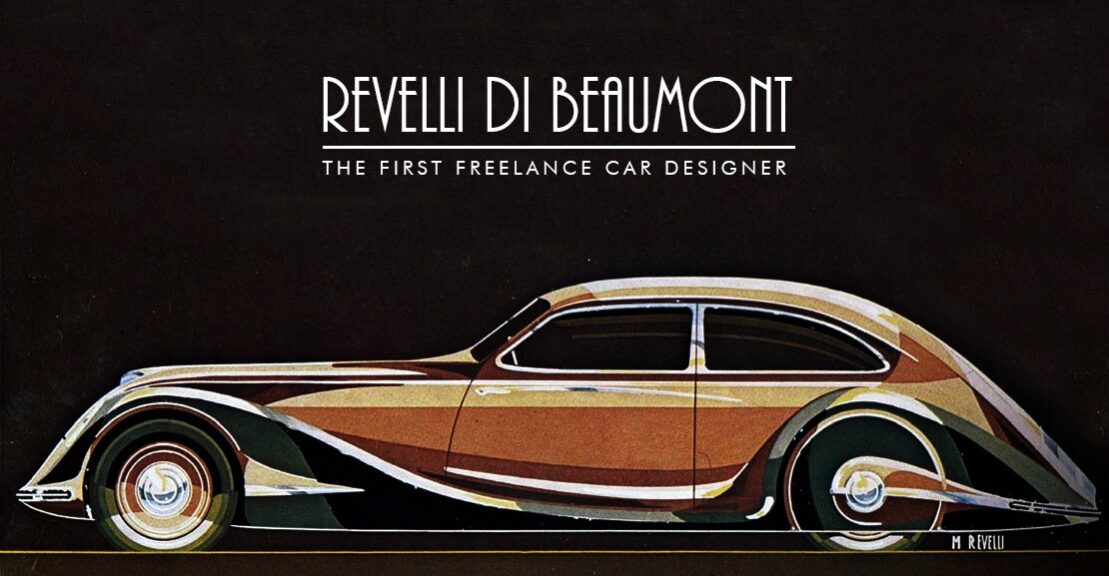 The story behind: Revelli di Beaumont

Of ancient Piedmontese noble origins, he was born in Rome on June 25th 1907 from Abiel Bethel, a well-known weapons designer, and by Lucia Bonomi.

He studied and graduated from the Military Academy of Nunziatella, in Naples, but at the same time he cultivated a passion for fine arts, supported by an aunt, a fashion designer. Passionate about mechanics and engines, at the age of seventeen he had collaborated with his brother Gino who ran a well-established mechanical workshop and motorcycle dealer in Turin
(the Galloni company, active between 1919 and 1932) and later, having become an engineer, he followed in his father’s footsteps. He founded, in fact, together with a Genoese entrepreneur, Francesco Nasturzio, the anonymous company Revelli Manifattura Armaguerra of Cremona, for the production of the semiautomatic rifle of his conception mod. 39 and the ordinary repeating weapons mod. 91. With Gino, Mario designed a racing motorcycle,

which he then successfully drove in increasingly important races. In September 1925, riding the GR (Galloni Revelli) 500, a competition motorcycle equipped with an English Jap engine of 499 cc, he won the Grand Prix of Nations at the national circuit of Monza, recently inaugurated. Promise of motorcycling, the “teenage champion”, as the chronicles called it, won the title of champion of Europe, in competition with well-known professionals like Achille Varzi, then passed to motoring. A series of severe accidents, however, forced him to abandon the motorcycle sport. He then dedicated himself professionally to the design of car chassises, a sector in which he excelled above all,

adopting an innovative approach that tried, ahead of his time, to create a synthesis between form and function. A highly original character, Revelli can be considered the first free-lance designer in the history of the automobile, the forerunner of a professional figure that would only spread during the second post-war period. His exceptional artistic talents, combined with a purely technical training, allowed him to propose himself to the Turin coachbuilders of his time as a refined and prepared designer, able to combine the industrial and construction needs with good taste and elegance required by the custom-built luxury cars. 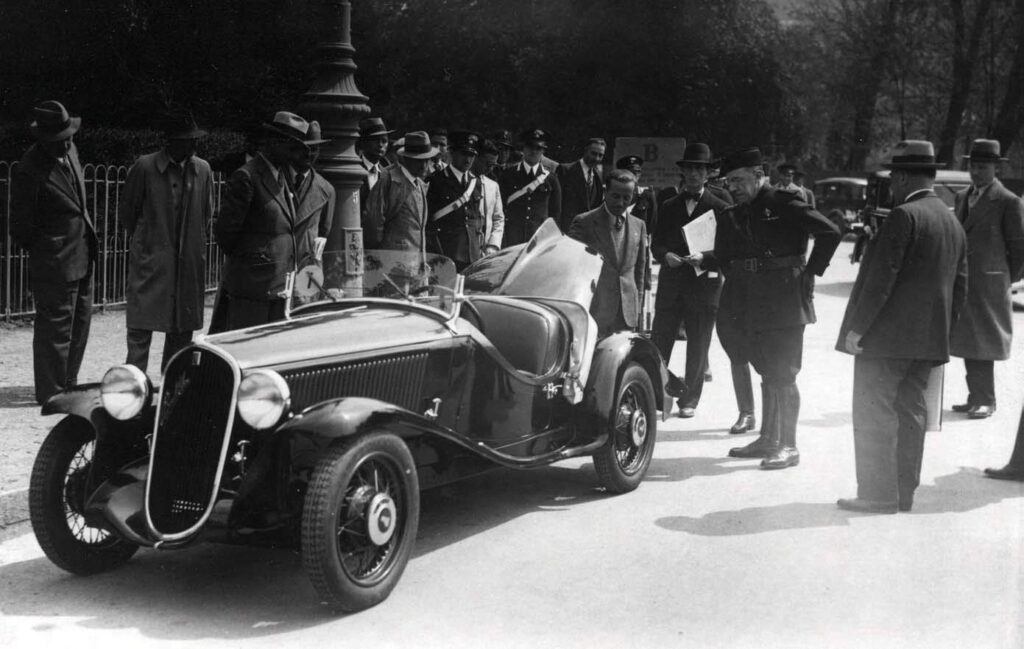 A Fiat 508S, designed by Revelli for Ghia.

Starting from 1925-26 he produced bodywork figures for the Farina, Garavini, Ghia, Montescani and Casaro plants, but it was with Vittorino Viotti that Revelli forged the closest ties and with whom he made many of his first masterpieces. Introduced by his father to Senator Agnelli,

After establishing himself as one of the best interpreters of sports lines during the 20s and 30s, Revelli became (along with Felice Bianchi Anderloni of carrozzeria Touring – read its story here) one of the strongest promoters of the aerodynamic evolution of the Italian bodywork. Drawing for Giovanni Bertone and for Viotti, he contributed significantly to the transition from the still extremely codified and mannerist forms of the early thirties cars to the dynamic and strongly modelled ones of the following era. In collaboration with the engineer Rodolfo Schaeffer (director of the centrostile Fiat), he created the 1500 (see the below picture), which in 1935 sanctioned the definitive passage of the Italian car to aerodynamic shapes, completing an evolutionary process begun in the previous two years with some realisations by Viotti and Bertone, above all on the Fiat 518 chassis ‘Ardita‘ and Lancia Augusta.

Attentive observer of every design aspect, Revelli didn’t stop himself, however, at the stylistic contribution. With Fiat 1500 – which was designed in absolute freedom starting from a white sheet – Revelli had, in fact, the opportunity to revolutionise the automobile even from the architectural point of view, with the first example of an aware approach to ergonomics. He moved the seats lower, setting a more reclined driving position, which guaranteed greater comfort and easier movements, at the same time allowing the car’s center of gravity to be lowered, thus improving stability. In addition to being a great designer, Revelli was also extremely fruitful in devising innovative concepts and systems in the automotive sector, which still amaze us for their importance and even more for the modernity of his ideas: in 1927 he invented and patented the opening deflectors of the doors , in 1931 the central locking, in 1933 the spiral-controlled window regulators, in 1940 the energy-absorbing steering wheel, the first futuristic approach to driver’s safety.

In the second half of the 1930s he went even further with his studies in aerodynamics, collaborating with SIATA (Italian Society of Auto-Aviation Technical Applications) and again with Viotti, with whom he also created the record-breaking Maserati 4CM for engineer Giuseppe Furmanik , developed at the Experimental Aeronautical Research Center of Guidonia (1937).

He also studied advanced guided architecture, which he theorised for a futuristic concept of taxis (similar vehicles would have been built only in the 1950s, see picture) and then applied them concretely on several buses of Candido Viberti and later on SIATA commercial vehicles, during WWII.
In April 1937 he married Luciana Ansaldi, 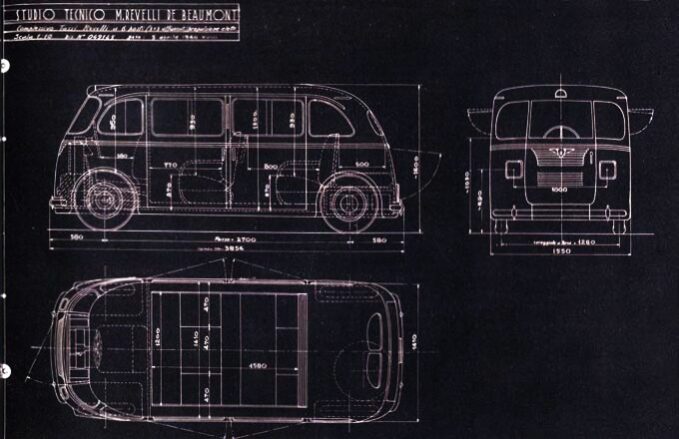 whom gave him their first son the following year, they called him Bethel Abiel, like his father. In 1941 their second born arrived, Michele. Extremely shy and always focused on the future, at the end of the 30s Revelli evolved his aerodynamic concept starting to propose models with a ‘ship’s bow’ front that found application at Fiat (1100 A and 1500 C, 1939) and, in a more refined way, in some creations by Viotti, Pininfarina and Bertone. He also designed several advertising vehicles, including some famous ones for the EIAR (Italian Organization for Radio Auditions), demonstrating how broad his design and creative vision of the car was; at that time Revelli enjoyed a his fame – in an age when the figure of the automotive designer or, more generally, of the industrial designer was still completely unknown – so much so that he was even commissioned by Italo Balbo (the governor of Libya ) to design a ‘caravan‘ for him (that is, a mobile home made from a bus with a trailer), then built by Viberti.

During the war he also conducted some innovative studies on urban mobility, realizing in 1941 the prototype of an electric micro-vehicle (called electric scooter, see below picture), and then he devoted himself to military products, designing trailers, field kitchens and even a system that set in motion the wheels of the plane before landing, to assist in it.

After being briefly imprisoned in Turin by the German occupiers and freed by the partisans, when the war ended he resumed drawing cars. He collaborated with Ghia, Pininfarina, SIATA, CANSA (Costruzioni Aeronautiche Novaresi SA), Moretti and with the French body shop Figoni & Falaschi, contributing in an important way to the definition of the new post-war automotive style, more compact and ‘clean’ compared to the previous decade one.

The most significant realization of those years was, however, was without doubt the ‘giardinetta’, a practical and economic bodywork, built in steel and wood (the metal was still difficult to find and its use was thus reduced to a minimum), which allowed to give a versatile and concrete answer to the great need for popular motorization of the reconstruction period. It was built starting from 1946 in many variations by Viotti and by the lesser-known Fissore di Savigliano, but soon it was imitated – most of the time without the authorization of Revelli – by almost all Italian coachbuilders and many foreigners ones. 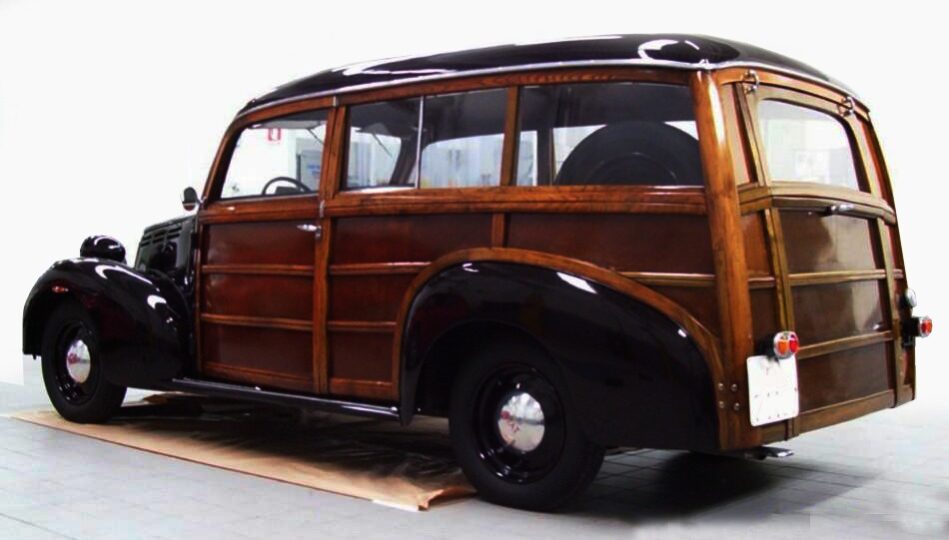 At the end of the 40s he began to collaborate with the French company SIMCA, designing the Huit 1200 (1949, an evolution of the Fiat 1100) and the Aronde (1951) and resumed its relationship with Fiat participating, with a non-prominent role, in the development of the 1400 sedan (1950). A consultancy with General Motors, which began in 1952, then held him back in the U.S. for two years, where he devoted himself to the study of compact city cars, and other futuristic research. Back in Europe, he resumed working with SIMCA, establishing a relationship that lasted for over a decade, from which the Vedette (1954), the 1000 (1961) – which is probably his last masterpiece, extreme synthesis of rationality and functionality – and the 1300/1500 (1963) were born. In the same period he also dealt with updating the style of French luxury cars Facel Vega.

Revelli’s collaboration with the Aermacchi motorcycle manufacturer is also known, for which he designed the futuristic body model Chimera (1956), a fully enclosed motorcycle with a 175 cc four-stroke horizontal single-cylinder engine, where mechanical and technical needs married in an original way with industrial design. The collaboration with SIMCA, now controlled by Chrysler, ceased in 1963 and Revelli operated in Grugliasco (Turin) and in Paris, intensifying the relations that had never ceased with US companies and research centers. 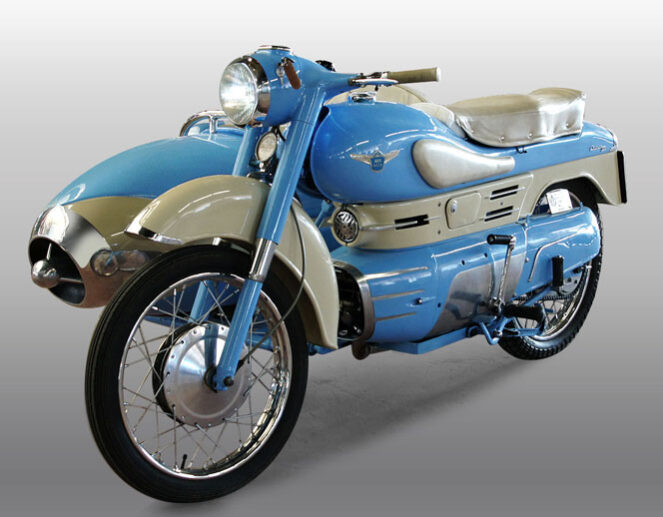 On behalf of the Bridgeport Brass Company and the Copper Development Association, in 1967 he created the Exemplar I (built by Sergio Coggiola on a Buick Grand Sport basis) to show the potential of copper and brass in the automotive world; followed the 1972 Exemplar II (based on the Chevrolet Toronado, build by Eurostyle), which dealt with the theme of the reconfigurable car with an unusual folding roof. He later devoted himself to teaching, also engaging in the creation of a worldwide automobile file and collaborating in the design course of the Art Center College of design in Pasadena and in the School of applied art and design in Turin.

He died on May 29th, 1985 in Grugliasco, where he lived and worked for some time.

NEXT 18 Oct 2019
Strategic agreement signed by Evergrande and Pininfarina