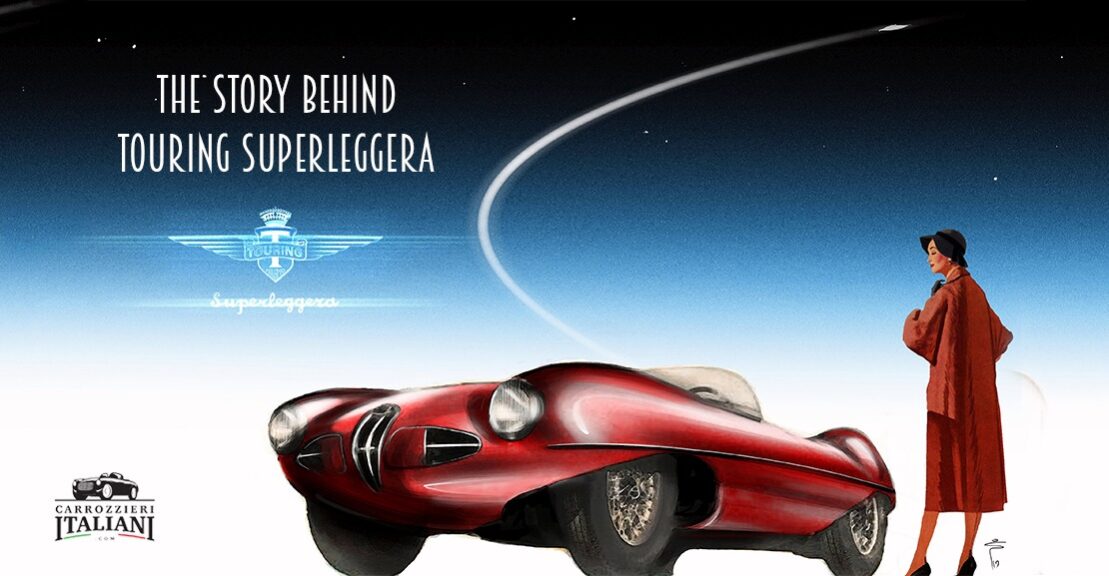 In early 1926, two lawyers from Milan – Felice Bianchi Anderloni and Gaetano Ponzoni – decided to leave behind the world of law and follow their passion for the automobile, purchasing a controlling interest in Milan-based coachbuilder Carrozzeria Falco from its founder,

Vittorio Ascari, who would then leave the company two years later.
They changed the name of the company to Carrozzeria Touring with Anderloni, a former test driver for Isotta Fraschini and Peugeot Italia employee, assuming styling and engineering duties, while Ponzoni took over responsibility for the firm’s business activities. The new company – based in Via Ludovico da Breme 65 in Milano – was destined to become one of the most famous coachbuilder.

Located as they were in close proximity to legendary automobile manufacturers Alfa Romeo, Citroën and Isotta Fraschini, it should come as no surprise that their first bodywork assignments were for chassis produced by these companies.

Initially, they took a traditional approach to their work, based on aesthetic and qualitative excellence, which guaranteed a stable of exceptional clientele from Benito Mussolini – who would prove to be a regular and affectionate customer – to the Italian King Vittorio Emanuele II and his wife, Queen Elena. The company licensed Weymann’s system of fabric-covered lightweight frames, a predecessor to their own Superleggera construction system, and hired Giuseppe Seregni, who had previously collaborated with Anderloni on the 1927 Isotta Fraschini ‘Flying Star’, as its first professional designer.

The “Superleggera” technique and its success

Their success with lightweight alloys and fabric-covered tubing forms brought Touring commercial success with aircraft production in the 1930s, which led Anderloni to developed the Superleggera system, patented in 1936.

This super lightweight system consists of a structure made from small diameter tubes forming the shape of the body with thin alloy panels attached to cover and strengthen the framework. This gave them the flexibility to quickly construct innovative body shapes for their cars.

During the 1930s, the company focused on a continuous collaboration with Alfa Romeo, producing a wide range of vehicles from gran turismo to real racing cars, applying its own concept of aerodynamics and lightness to this and other collaborations with well-known manufacturers such as Bianchi and Lancia.

With the outbreak of the second world war, the company’s name was Italianized to “Touringa”, in order to avoid seeming too Anglicized, which was particularly unwelcome at the time, and they focused on producing aircraft parts according to the Superleggera system. They continued their research on paper during this time, suspending automobile production. When they were able to start building cars again – reverting to the “Touring” name in 1947 – after the end of the war, their style gradually became more Americanized, partially due to the fact that Europe had not been producing cars for the previous few years.
The Superleggera system was widely licensed and copied, contributing to reenergization of the company following the end of the war. Anderloni died in 1948 and his son, Carlo Felice “Cici” Bianchi Anderloni, took over management of the firm under Ponzoni’s guidance. The two men would remain in charge of the company until it discontinued production in 1966.

Before Anderloni’s death, the company worked on a number of interesting projects overseas, first with Bristol, followed by the Spanish Pegaso and the American Hudson, and finally with Aston Martin and Lagonda (production took place in England by Mulliner and Tickford, under license of Touring).

Between 1947 and 1948, Touring also collaborated with Isotta-Fraschini in an ultimately unsuccessful attempt to bring the brand (to which Anderloni was extremely attached, having begun his carrer there as quality manager) back to life, creating prototypes for several different models (8C Monterosa  & the 8C Monterosa Special Sedan ) that will sadly never be produced.

Touring worked with Enzo Ferrari, before going back into business with Alfa Romeo, and in 1949, the company started production on the Granturismo 6C 2500 “Villa d’Este”. Cici’s first major project was to create a body for the Ferrari 166 MM Touring barchetta, which debuted in 1948. Automotive design

critic Robert Cumberford Cumberford once referred to the body design for the 166 as “one of the most charismatic shapes ever”; the egg-crate grill of the 166 became a signature Ferrari design element and is still in use by Ferrari today. Touring was particularly active late in the late 50s, working on design and body production for the Pegaso Z-102, Alfa Romeo 1900 Super Sprint, Aston Martin DB4, Lancia Flaminia GT, Lamborghini 350 & 400 GT and the Maserati 3500 GT.

The famous Aston Martin DB4, the DB5 (famously driven by fictional character James Bond) and the DB6 were named after the one-time Aston Martin owner David Brown, who entrusted Touring Superleggera to design the company’s next generation GT, following the introduction of the successful DB2. The license agreement allowed Aston Martin to use the design and the Superleggera construction method at its Newton Pagnell plant against a license fee of £9 for each of the first 500 bodies and £5 for each further unit.

Touring Superleggera’s fortunes started to decline as automobile manufacturers started to replace body-on-frame construction with monocoque construction. Carmakers began to build their own bodies in their production lines but were unable to produce fewer than a thousands units per year, so decided to assign body production to coachbuilders, who invested in additional manufacturing capacity as a result. Touring built a new plant in Nova Milanese, but market fluctuations upon its completion in 1962 resulted in the loss of contractors and the company was forced to wind-up operations in 1966, although it never formally declared bankruptcy.

The decision to build the new plant was based in part on negotiations with the Rootes Group, which commissioned the installation of the Sunbeam Alpine to Touring, which should have been followed by the Hillman Super Minx and the Sunbeam Venezia. These orders were cancelled, however, and Touring suddenly found itself in crisis mode with an

insufficient amount of work and an inability to deliver on the quality that it had been able to guarantee at its old factory in Rome. Further negotiations with Maserati, O.S.C.A, and Aston Martin (which also commissioned the DB5 carriages project in 1962, and then again with the DB6 in 1966, but continued to build in England) brought no results and therefore, against an enormous debt exposure, Touring was forced into receivership in 1964.
The Fiat group attempted to help by commissioning Touring to work on the study and production of the Autobianchi Primula Coupé – and Alfa Romeo commissioned the company to build the bodywork of the Giulia GTC – but even with these new orders, the situation did not improve. Many models didn’t make it past the prototype stage including the Aston Martin DBS, coupè and cabriolet, several studies for Lamborghini including the beautiful Flying Star II.
During the winding up period, roughly 80 percent of Touring Superleggera’s archives caught fire. Seeking to reestablish a record of the firm’s production, Carlo Felice Bianchi Anderloni got in touch with every owner, creating the Touring Superleggera registry and leading it from 1995 on. In 1995, he contributed to the revival of Concorso d’Eleganza Villa d’Este, serving as President of the Jury until his death in 2003. In his honor, the show started to award the “Carlo Felice Bianchi Anderloni Memorial Trophy” to the most elegant car with a body by Touring each year.

In 2006, the Touring brand was taken over by the Dutch financial company Zeta Europe BV Group (owned by the Belgian family D’Ieteren, who were also coachbuilders and entrepreneurs in the automotive sector), which also owns the historic Borrani brand. A newly created firm, Carrozzeria Touring Superleggera was established in Milan to provide automotive design, engineering, coachbuilding, homologation services, non-automotive industrial design, and restoration of historic vehicles.

At the 2008 Concorso d’Eleganza Villa d’Este, Touring debuted the Bellagio Fastback Touring, based on the Maserati Quattroporte and the A8 GCS Berlinetta Touring, a concept car powered by a Maserati drivetrain. At the 2010 Geneva Motor Show, the Touring Bentley Continental Flying Star premiered: a shooting-brake model based on the Bentley Continental GTC, coach-built in limited series with the endorsement of Bentley, and in 2011,

it was followed by Gumpert Tornante by Touring, a super-fast Grand Tourer commissioned by the German sports car manufacturer. In recent years, Touring has worked on projects for Alfa Romeo (with the revival of the legendary “Disco Volante” inspired by the C52 from 1953), and Mini (Superleggera Vision), and most recently on the Ferrari based Touring Berlinetta Lusso and Sciàdipersia Coupè, with a cabriolet version presented in 2019, paying homage to the notorious model made in 1959.